Einstein’s Girlfriend on National Geographic By Alberto A. Martinez | April 25, 2017

The story and teleplay of the new series GENIUS were written by Noah Pink and Ken Biller, based on the biography Einstein: His Life and Universe, by Walter Isaacson. The crew filmed in Prague, achieving beautiful production design, with many details and objects from the period, in rooms flooded by sunbeams and shadows. It gives us an opportunity to reflect not just on Einstein’s life, but on Mileva Marić. 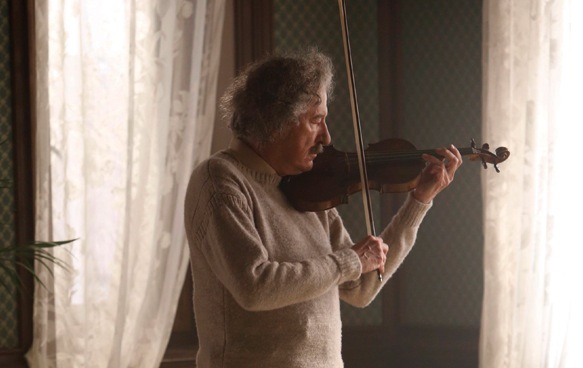 It is a bad cliché that people need to see sex and violence to be drawn into a movie. So GENIUS begins with two such scenes. First, one of Albert Einstein’s friends is assassinated in broad daylight by a barrage of gunshots and machine gun rounds, bloody, followed by a grenade. Second scene: Einstein (played by Geoffrey Rush) is in his office having sex (no—it should be the f-word) with his secretary, standing up, against a chalkboard, talking about God, and afterward he brushes chalk dust off of her blue dress.

Then, the phone rings—it’s a call from Mileva Marić. But Einstein refuses to answer. Why?

Marić was Einstein’s first wife. They met in college. She too studied physics. Most remarkably, in a letter of 1901 Einstein told her “How happy and proud will I be, when we both together have brought our work on the relative motion victoriously to its end.” Laypersons took this to mean that she was his secret coworker. It was a sensational story. But historians of physics say that it only shows that in 1901 Einstein worked or hoped to work with her on the infamous problem of detecting the relative motion of the ether, not necessarily that she helped him create the theory of relativity in 1905. 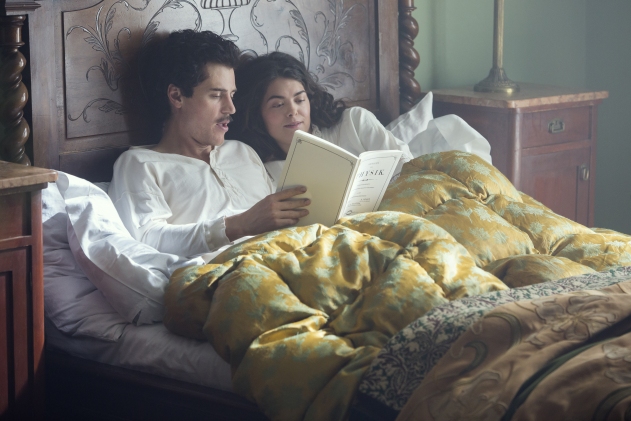 Mileva Marić was born in 1875, in Titel, Vojvodina, now a part of Serbia. While growing up she cultivated an interest in science. At the time, most universities in Europe did not allow women to study science. So she earned admission to the Polytechnikum in Zürich, Switzerland, where women could enroll.

In her first year there, 1896, she was one of four female students (16 others were males, including Einstein) enrolled in the program to train teachers of math, physics, and astronomy. But Marić was the only new female student in that program. (There were also five other female students training to be teachers of other natural sciences, along with 17 other males.)

In 1900, Einstein and Marić took their final examinations. Einstein passed, but unfortunately Marić did not. He left the Poly with no offer to become a professor’s assistant, and with no chance to do a PhD there. (Because he had skipped classes, antagonized some professors, and graduated without distinction.) However, Marić had a second chance to take the final exams, and then she might even do a PhD. Einstein was impressed that his girlfriend might become a doctor while he remained an ordinary guy. But sadly, she again failed her final exams the next year thus losing the chance to do graduate work.

In the new series, the young Einstein is lighthearted and humorous, but a bit stressed-out, almost jittery. The writers rightly portray him as a guy who despised the idea of becoming an engineer. Instead, he wants to study theoretical physics. Neatly portrayed by actor Johnny Flynn, this Einstein speaks English with a raspy German accent. 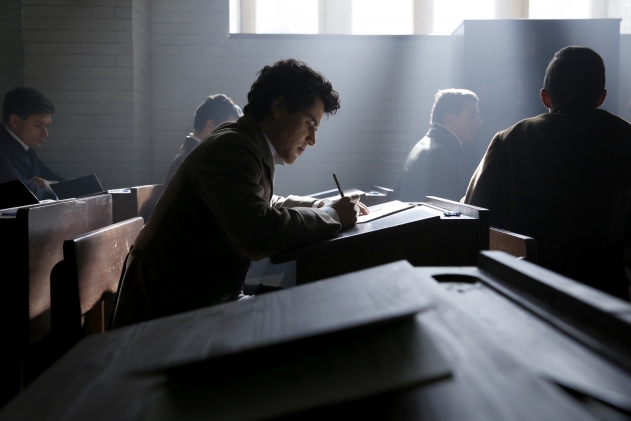 GENIUS portrays Mileva Marić as tense, forceful, and driven. She walks with a limp. The sole of her left shoe is much thicker than the right, as if her left leg were shorter. Her shoe clomps on hardwood floors. (Apparently she was born with a congenital hip misalignment, but some writers echo Einstein’s mistaken impression: that Marić was disabled by tuberculosis.) The writers invent anecdotes about Marić’s skills in math and physics. For example, we are told that in the college admissions exam, she scored higher than Einstein and anyone else in math.

This fictionalized Marić is tough and contentious. She brags about her knowledge and independence. “I did not come to university to flirt, or to meet a man, and certainly not to find a husband!” When Einstein replies that she misunderstood him, she yells with anger: “Stay away from me!”

Still, eventually his persistence manages to win her over. Einstein says: “I’m head over heels in love with your mind.” And it is true that he loved her as his intellectual equal, as he once wrote.

Yet the teleplay repeatedly portrays Einstein as an obstacle to her studies. Marić is terribly stressed, so she tries to pull away, calling him a distraction. Historically, it’s known that Einstein skipped many classes. So now, the teleplay imagines that Marić did too, and that it was because he obstructed her. One morning she wants to rush out: “Albert be serious, we’re late for class!” But Einstein stops her, to have sex.

We know where this is going. In this mythical story, Einstein will become a success thanks to Mileva Marić. At the same time, she will become a tragic failure thanks to Albert Einstein. Myths can be cultural dynamite. Suddenly Marić flips out: “You promised me! But you haven’t supported my studies! You haven’t helped me catch up! You’ve syphoned my time, my thoughts, my energy, all for your own gain! How could you be so careless with my heart!!” She seems to have a nervous breakdown, crying, hitting herself.

In GENIUS several men actively obstruct or demean Marić. It even portrays Einstein’s kind friend, Marcel Grossmann, telling him something stunningly rude: “I was wondering when you would pull your head out from between the gimp’s thighs.”

Still, Samantha Colley’s portrayal of Marić is compelling. She acts with verve and anger. Her jawline is strong, her hair disheveled, her eyes alert. She’s nearly humorless, suspicious, tormented. She speaks as if she’s wielding an icepick. Her outbursts of emotion become so tempestuous that she begins to resemble an anguished melodramatic archetype: a character in a Greek tragedy. She seems erratic and pessimistic, like a hypochondriac prone to anxiety attacks, so stressed that she becomes neurotic and deranged. There is a tinge of fear in her eyes, and she walks as if she’s pushing forward into the future, with a terrible dread, like a steam engine pushing a train to a bleak destination, inexorably. Bewildered, she stops taking notes in a class.

Oppressed by the endless strength of fate, she will fail—because of a selfish young man, because of a world made by sexist men, because of male screenplay writers who will ensure that she fails again. It is not just about the past; people still discriminate against women in universities. As I write these words, I read an email by one of my female students who complains about how some of her peers criticize her for being “overly logical.”

At the end of Episode Two, Mileva Marić is full of regret; she is sad and apologetic to her father for being pregnant. But we want her to win. So those same writers add various imaginary moments to bolster Marić’s achievements in science and math.

This haunting portrayal of Mileva Marić brings to life the struggle against the immense obstacles that women really did confront. It shines with the tenacious, lonely courage that she really did have.