Close Encounters At The Museum of the Moving Image April 14, 2016

What would it be like to see a UFO? As it turns out, close encounters with alien spacecrafts make people lose their minds. But, what if these visions were real? In Steven Spielberg’s precursor to E.T.—the 1977 film CLOSE ENCOUNTERS OF THE THIRD KIND—there is a tension between scientists’ assertions about the existence of aliens and government skepticism. In the movie, which the Museum of the Moving Image will be screening, a cartographer ends up saving the day by decoding alien signals as earth coordinates. This leads him, a team of scientists, and a group of individuals who have had a close encounter with the alien spacecraft to a land monument called Devil’s Tower in Wyoming. The group of scientists, led by a French scientist played by François Truffaut, communicates with the spacecraft and its alien inhabitants using a universal language based on tonal sounds with corresponding hand movements.

Communication is a major feat. A maniacal electrician, played by Richard Dreyfus, jumps on board, literally and metaphorically, with the alien encounter. The UFO, in un-scientific terms, looks like an orange-flavored ice cream cone, or maybe a taco. 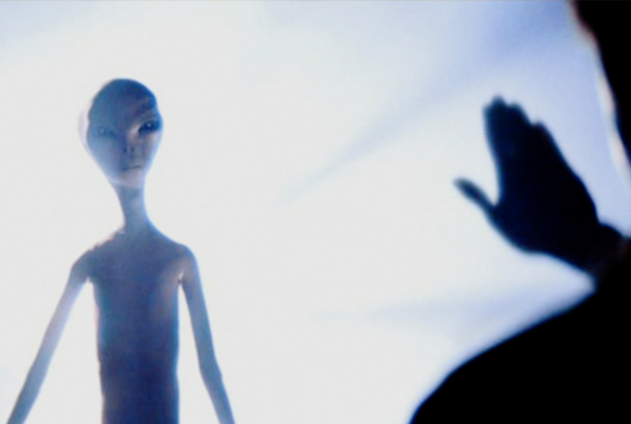 CLOSE ENCOUNTERS OF THE THIRD KIND special effects supervisor Douglas Trumbull also advised Stanley Kubrik on the making of 2001: A SPACE ODYSSEY almost a decade earlier. He was hired away from Graphic Films, a company which made technical films for big industry and government clients—Trumbull conducted research and created concept sketches.

The name, CLOSE ENCOUNTERS OF THE THIRD KIND, is based off a classification system developed by Dr. Josef Allen Hynek, an American astronomer and UFO researcher who died in 1986. He makes a cameo at the end of the film. A close encounter of the third kind is contact with alien life forms. Hynek deduced that there was a real phenomenon of UFO sightings, as he says in a 1977 interview:

The Museum of the Moving Image will screen Spielberg’s CLOSE ENCOUNTERS OF THE THIRD KIND in 35mm as part of its See it Big! series. The screening will take place Friday, April 22 in the Museum’s Redstone Theater. Science & Film previously interviewed Douglas Trumbull about the making of 2001: A SPACE ODYSSEY.