Undead to Me: Zombification of People and Pests By Dwayne Godwin | June 22, 2022

This article was commissioned to accompany Museum of the Moving Image's exhibition 'Living with The Walking Dead,' on view from June 25, 2022–January 1, 2023.

Zombies have been a reliable staple of the horror genre since NIGHT OF THE LIVING DEAD (1968) set the rules for the ghouls. There is just something about them and their mindless, rotting, insatiable hunger that chills the blood of the living. Becoming a zombie is like being invited into a club that no one wants to join, or contracting a disease no one wants to have. What makes a zombie unique amongst Earth’s fearful monstrosities?

It’s not just being undead that makes zombies scary. Frankenstein’s titular monster was in some respects a zombie, but his reanimated corpse possessed a functioning (albeit abnormal) brain that hungered mainly for acceptance and understanding. Making another monster, even a bride for Frankenstein’s creation, took a bit of effort. Dracula is definitely in the category of the undead protagonist, but in his various incarnations he viewed people as prey to quench his bloodlust. The spread of classic vampirism is somewhat magical, sometimes even intimate, limited in scope, and subject to certain rules in the sharing of body fluids between the vampire and victim. Both Frankenstein's monster and Dracula, as conscious agents, were central protagonists in their own narratives.

Zombification strikes a number of uniquely terrifying chords in the hearts of the living. Being a zombie in a classic sense means that your body is separated from your consciousness (some exceptions being the TV series iZOMBIE and the movie WARM BODIES). The loss of your mind, leaving your corpse to relentlessly shamble around to consume the flesh or brains of the living, are the most persistent tropes of the genre. Narratives including zombies are rarely centered on zombies, but on the effects they have on the living.

The first appearance of a zombie in cinema was 1932’s WHITE ZOMBIE. Cobbled together in part from Haitian legends of ritual and potions, zombification was used to convert the living into minimally conscious puppets who were subjected to the control of a zombie puppeteer, for the express purpose of performing labor. 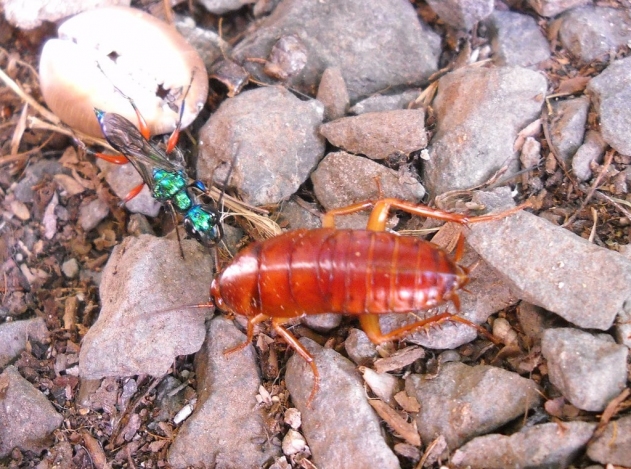 The voodoo-inspired variants of WHITE ZOMBIE bear little resemblance to the undead versions that are more commonly portrayed today, but they do resemble a type of zombie actually found in nature. Jewel wasps, found in Africa and Asia, use a combination of venom and brain surgery to convert a normal cockroach into a zombie cockroach. The wasp attacks and initially immobilizes the roach, using its stinger to inject the roach’s brain with a venom that disrupts brain signals that control voluntary movement. The wasp then steers the compliant cockroach to a burrow, where it lays an egg in the roach and entombs it so that it will helplessly gestate the wasp’s offspring. Like the movie WHITE ZOMBIE, zombification is personal, and to achieve a specific purpose.

More recent portrayals of zombies, like the Walkers in THE WALKING DEAD, lean heavily on what appears to be a disease model of zombification. George Romero’s NIGHT OF THE LIVING DEAD established many of the tropes of modern zombie films, including how it spreads: 1) the zombie state is transmissible from the infected to the living, usually through bites–death can also create a permissive condition for the “zombie virus” to take hold; 2) the transmission is without any higher order consciousness–it is driven by an instinctual drive to consume the living and spread the “disease.” 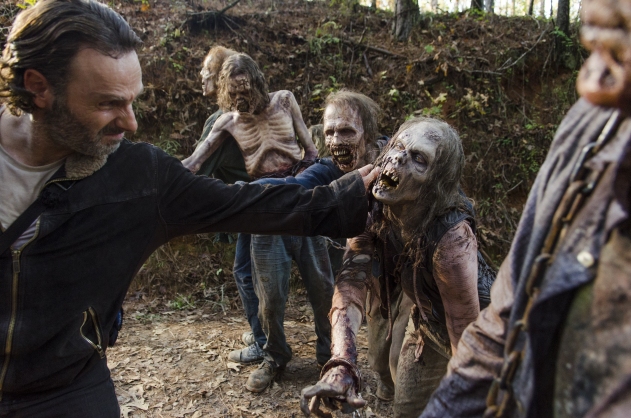 Still from THE WALKING DEAD. Courtesy of AMC Networks.

This type of instinctual zombification is also found in the insect world. Ophiocordyceps unilateralis is a fungus found in tropical forests around the world. The fungus infects carpenter ants, hijacks their bodies, compels them to crawl up young saplings, then clamp on tightly to the underside of leaves about 25cm above the ground. Somehow, this fungus has evolved to force ants to seek out the perfect conditions of temperature and humidity for the fungus to grow and spread. Once in position just above the ant trails, a fungal stalk called a fruiting body gruesomely erupts from the base of the zombified ant’s head, from which it releases spores onto the forest floor and ant trail below. These spores then infect the next cycle of ants as they walk through them. The “infected” featured in THE LAST OF US video game series features a mutated version of this fungus as the basis for humanity’s terrible plight.

A zombified ant with a grotesque fruiting body protruding from the base of its head, ready to release spores to infect other ants. Photos by David P. Hughes, Maj-Britt Pontoppidan. Licensed under CC BY 2.5.

In THE WALKING DEAD universe, how Walkers came to be has been shrouded in mystery until recently. A post-credit scene of the spin-off series WALKING DEAD: WORLD BEYOND revealed that the virus that brought the world to its knees was engineered by the French in a biomedical research laboratory and was released into the wild– intentionally or not, we still don’t know. But knowing that Walkers were produced from a virus means that it could follow some of the same rules of viral transmission we’ve all experienced with coronaviruses, including the terrifying possibility that the zombie virus could continue to mutate and evolve. Viral evolution tends to favor transmission that spares the viral hosts long enough for transmission to occur, and novel variants that could produce different effects in the infected are possible. For example, in WORLD BEYOND, a newly infected and zombified researcher moved much more quickly than the Walkers we’ve seen in the WALKING DEAD universe thus far, more akin to those seen in WORLD WAR Z. We not only learned that there’s a Walker virus, we also learned that terrifying variants exist.

Many of us have experienced the fear that we could unwittingly infect others with COVID-19, and that those closest to us could succumb to a potentially fatal disease. Understanding that the zombified condition of Walkers is biological lets us speculate what may be happening to them, based on what we already know about naturally occurring viruses. For example, rabies virus is transmitted through bites, affects brain function and behavior, and is highly lethal if untreated. Rabies travels along nerve pathways into the brain, so thinking of zombification as an infection by a rabies-like virus that destroys the regions of the brain that hold our complex thoughts (like the cerebral cortex), or fine motor movements (like the cerebellum), while sparing or even amplifying the drives of a zombie’s unusual appetites in brain areas like the hypothalamus and amygdala, is not completely farfetched.

READ MORE: Blood Science: How to Build a Vampire

Do we actually need to be kinemortophobic (afraid of zombies)? There are several reasons why you and your loved ones are probably safe. The human body is a finely-tuned biological machine capable of amazing feats of movement and cognition, but like all machines it requires energy. For our bodies, adenosine triphosphate (ATP) is the major molecular energy source that fuels the body – it permits the contraction of muscles, and the generation of nervous impulses. The amount of ATP needed to run the brain and the rest of the body is enormous, and requires oxygen to manufacture it. Dying stops the biochemical process that makes ATP. In other words, if you aren’t alive and breathing, your zombie battery would run down within a few seconds of your last breath. You wouldn’t be able to manage a single shamble, much less sit down to a meal of brains.

Even if zombies were produced through a rabies-like virus, spreading the condition through bites would be very difficult to do. Virologists use a measure called R0 (pronounced “R-naught”) to characterize the efficiency by which individuals spread a virus through a population. As a comparison, the R0 of the airborne virus that causes COVID-19 (depending on the coronavirus variant) is above 3.9 (measles is even higher) while the R0 for rabies, transmitted through body fluids, is closer to 1.0. So as long as zombie viruses spread through bites from the infected like a rabies virus, the world is safe, because we could theoretically control the spread and develop a vaccine (even allowing that some people may, unfortunately, resist these measures). The most effective transmission for viruses is through the air, not a bite.

These limitations might be reduced if the virus was engineered (at least in the fictional labs of sci-fi/horror science). For example, rapidly replicating viruses might be engineered to hijack the cell’s machinery to stimulate production of ATP through some means other than respiration, which might recharge the zombie battery. A virus that could spread through the air or that is more resistant to degrading in the environment might be engineered – and we know that viruses can mutate into more transmissible forms. So, there’s still a lot of room for suspension of disbelief when it comes to watching horror films.

By the strictest definition of a reanimated corpse, you probably do not need to worry about zombies. But, as Hamlet said, “There are more things in heaven and earth, Horatio, than are dreamt of in your philosophy.” Maybe Hamlet had zombies on the brain when he said that.