Sci Fi about Rocks From Space, and Beyond By Sidney Perkowitz | February 22, 2022

Among the subgenres of science fiction, the one I call “rocks from space” leans most heavily on apocalyptic disaster. Large chunks of matter such as asteroids and comets (in fact more ice than rock) crash into or narrowly miss Earth. The dramatic story of these cataclysms and humanity’s response has inspired blockbuster science fiction films including WHEN WORLDS COLLIDE (1951) , DEEP IMPACT (1998) and ARMAGEDDON (1998). Recently, there have been two: DON’T LOOK UP (2021) and MOONFALL (2022).

These films echo real events. Sixty-six million years ago, an asteroid 12 km across slammed into Mexico’s Yucatan Peninsula at 45,000 mph. It generated tsunamis, a crater 150 km across, and atmospheric debris that partially blocked sunlight, wiping out most living species including the dinosaurs. Even a smaller space rock is dangerous. Fifty thousand years ago, a rock 50 m across dug a kilometer-wide crater in the Arizona desert. In 1908, a 50 m rock burst in mid-air over Siberia, felling millions of trees.

More recently, in 2013, an airburst of a 20 m rock injured 1,500 people in Chelyabinsk, Russia. This past January, astronomers spotted a relatively nearby asteroid 70 m across–“nearby” meaning further away than the Moon. This particular asteroid poses no danger, but underlines the reality that space rocks exist that could seriously damage or destroy Earth, a species, or a city. To counteract this danger, NASA’s Planetary Defense Coordination Office (PDCO) tracks threatening space objects and develops ways to deal with them such as deflecting the rock by pushing it sideways with a spacecraft.

Long before the government took space rocks seriously, however, science fiction films were building stories around them. One reason these stories have remained compelling for 70 years is that they offer insight into humanity’s best and worst as people face total catastrophe. Each of the five films has a hero or heroes, and some portray villains as well. There’s also the purely cinematic appeal of showing the spectacle of global-scale destruction. One way WHEN WORLDS COLLIDE (WWC) influenced later films is that its special effects drew attention and won an Oscar. 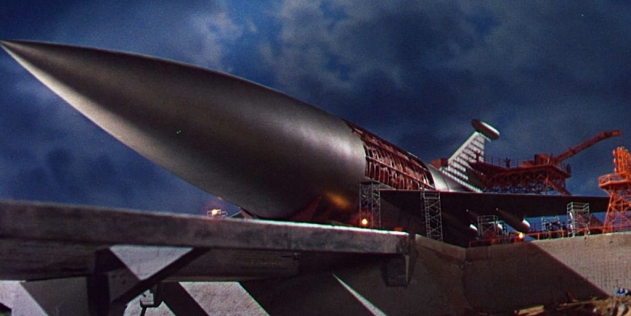 In WWC, astronomers learn that the rogue star Bellus will strike the Earth in eight months. They propose building a spacecraft to carry survivors to Zyra, the planet accompanying Bellus. The U.N. rejects the idea, but a wealthy industrialist funds the craft in return for a seat aboard it. As construction frantically proceeds, Zyra approaches Earth causing tsunamis and earthquakes, and society breaks down. With destruction imminent, 45 passengers board the craft. The final scene shows them disembarking on verdant and beautiful Zyra.

A project to remake WWC led to DEEP IMPACT, where a NASA spacecraft is sent to deflect a threatening 11 km-wide comet with nuclear bombs. Instead, they split the comet into two pieces. One creates a destructive tsunami in the Atlantic Ocean, but the bigger one is blown to harmless fragments as the spacecraft crew sacrifices itself so humanity can survive. To compete with this film, ARMAGEDDON was rushed into production. In its story, an asteroid “the size of Texas” will hit the Earth. NASA plans to put a nuclear bomb inside the asteroid, purposely splitting it into two pieces with diverging paths that will miss Earth. This mission too has problems, but again a self-sacrificing crew member triggers the explosion and catastrophe is averted.

In MOONFALL, the new film by Roland Emmerich, the path of the Moon itself goes awry. The first person to see this is science nerd K.C. Houseman (John Bradley), who believes the Moon is a gargantuan artificial megastructure. When he announces that it is leaving its orbit, ex-astronaut Brian Harper (Patrick Wilson) rejects his idea, but more data confirm that the Moon is approaching the Earth. Furthermore, NASA has had indications that the Moon is hollow, and an earlier Moon mission with Harper and fellow astronaut Jocinda Fowler (Halle Berry) encountered a deadly swarm that has never been explained. 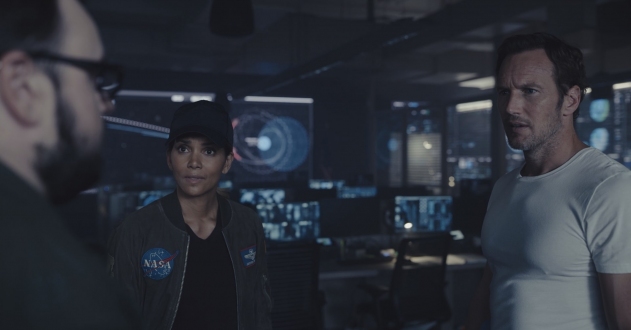 People panic as the Moon grows huge in the sky and causes tsunamis. Meanwhile Harper, Fowler, and Houseman fly a space shuttle to the Moon. They find that it was indeed made billions of years ago by humanity‘s ancestors, and that the swarm is an AI those ancestors created, which has become hostile to organic life. The AI is stealing energy from a white dwarf star that powers the megastructure, and is piloting the Moon towards Earth to destroy its life. Houseman volunteers to lure the swarm away from the shuttle, then sets off an electromagnetic pulse. This terminates the swarm and restores the Moon to its orbit, although at the cost of Houseman’s life. Harper and Fowler survive and land in a shattered New York City.

The other new release that took up similar themes, Adam McKay’s DON’T LOOK UP, attracted heavy viewership on Netflix. Though overtly about the existential threat of a 9 km-wide comet, McKay has said “the point of the movie is not really about the threat. It's about our reaction to it.” That reaction astonishes and dismays graduate student Kate Dibiasky (Jennifer Lawrence) who discovered the comet, and her adviser Dr. Randall Mindy (Leonardo DiCaprio), who calculates that it will hit the Earth causing an “extinction event.” Dibiasky, Mindy, and the head of PDCO try to warn U.S. President Janie Orlean (Meryl Streep), but she is not interested. Then Dibiaski and Mindy tell the world about the comet on a TV talk show, but their hosts treat it flippantly and arouse little public interest. 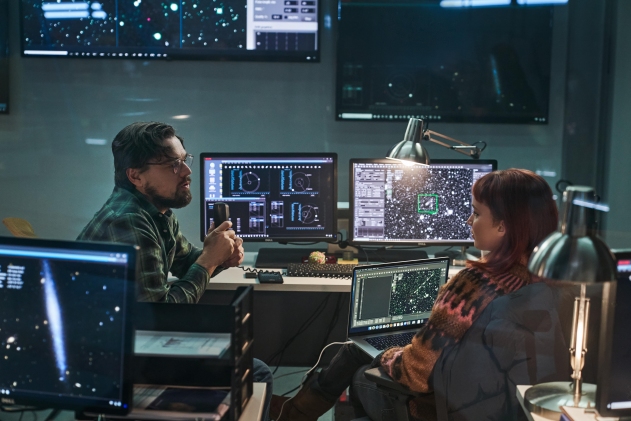 Leonardo DiCaprio and Jennifer Lawrence in DON'T LOOK UP

However, when Orlean faces a sex scandal, she distracts the public with a plan to divert the comet with nuclear weapons. But she aborts the mission when Peter Isherwell (Mark Rylance), the billionaire CEO of a tech company and a major donor to Orlean’s party, says he can save the world. His proprietary rockets will execute precisely timed explosions that split the comet into 30 pieces aimed at the Pacific Ocean, where with the help of the U.S. Navy, trillions of dollars worth of precious metals can be collected –not coincidentally, making Isherwell even richer. An advertising campaign convinces some that the comet will bring benefits, whereas others deny its reality even as it becomes visible to the naked eye.

Still, the world is hopeful as Isherwell’s rockets begin their launch sequence. Yet enough of them fail that the comet remains whole and continues straight toward the Earth, where it creates total devastation. Orlean, Isherwell, and 2,000 other rich and powerful people escape aboard a secretly constructed starship that puts them into cryogenic sleep as it seeks an Earth-like planet. Thousands of years later, in a scene like the end of WWC, the passengers walk out onto a beautiful world rich in oxygen. But a final twist that I won’t reveal shows that their future on this world is hardly certain. 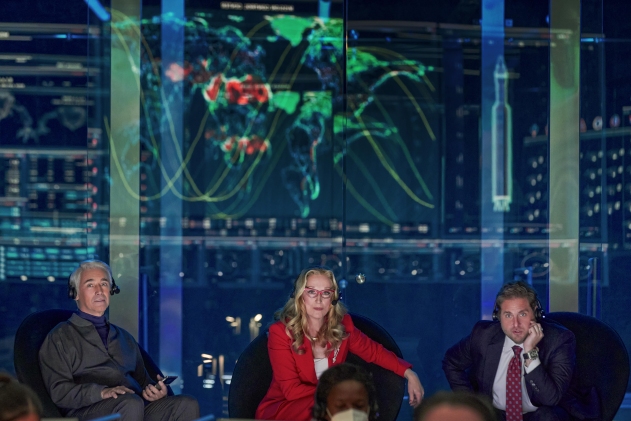 The science in WWC, DEEP IMPACT, ARMAGEDDON and DON’T LOOK UP is relatively plausible. It draws on what we already know about space rocks except for one essential fact: very few real rocks are big enough to extinguish Earthly life. Our planet is estimated to encounter a 10 km asteroid once every 100 to 200 million years. But in MOONFALL, the science is confined to catchy throwaway phrases like “Roche limit” (a real thing, the distance between two celestial bodies where their mutual gravitation becomes destructive). Instead, the film uses unsupportable or wholly speculative ideas such as humanity’s lineage going back billions of years, and A.I. machines becoming not only intelligent but hostile. Science fiction often cannot work without some suspension of disbelief, but MOONFALL asks for too much credulity.

DON’T LOOK UP uses the relevant science to support its story of two earnest scientists trying unsuccessfully to save the world, a parable about climate change and the COVID pandemic. The film satirically touches on the problems that make us unable to deal with these and other societal issues: the political fracture and hatred that turn policy disagreements into pitched battles, whether between politicians or ordinary citizens; the corrupting influence of money on politics; the power but also the shallowness of the media. Anyone who has lived through the last five years in the U.S. will recognize the film’s funny references to the many low moments we have experienced.

DON’T LOOK UP is not a great film, but compared to the other entries in “rocks from space” science fiction, it stands out for illuminating more than just the science or just the fiction.