The Existential Threat of A Hole
By Sonia Shechet Epstein | August 18, 2021

Molly Murphy’s new animated short film A HOLE is a timely portrayal of what one billionaire might do were the world to end today (and what could go wrong with their plan). To get the science in her film right, Murphy worked with Clifford V. Johnson, a British theoretical physicist and USC professor who has advised on such blockbusters as AVENGERS: ENDGAME, THOR: RAGNARAK, and STAR TREK: DISCOVERY.

Murphy made A HOLE as her thesis film at USC, and it received a Sloan Production Grant from the school in 2018. The film has since been selected by festivals around the world including Palm Springs International Short Fest, Woods Hole Film Festival, Burbank International Film Festival, and La Guarimba Film Festival. It is premiering on Sloan Science & Film as part of its online release. We spoke with Murphy about working with her science advisors, the technologies used to make the film, and how the first image of a black hole couldn’t have come at a better time.

Science and Film: A HOLE is a really funny title with two meanings. How did you come up with the story idea?

Molly: I was thinking about existential threats. I’ve done a lot of work with scientists at USC; I got my start working with a group of oceanographers doing research about climate change. The combination of thinking about: threats to humanity like climate change, when Trump was in office thinking about having this narcissistic lunatic in office, and thinking about the division of wealth and tech billionaires who are interested in escaping existential threats rather than facing them head on. I was interested in concocting a dark fable out of these ingredients as a way of processing the trauma of it. At the same time, my impetus for going to USC was to work with scientists making animation related to some of their findings.

There was a professor, Clifford V. Johnson, who had just taken a sabbatical to write a graphic novel about theoretical physics called The Dialogues. This book is amazing. It illustrates really challenging physics concepts in a way that is very easy for the non-scientist to access. He had a segment where he talked about time dilation as part of the theory of relativity. He brought in the example of time running differently under the force of gravity—if there is less gravity time runs quickly, if there is more gravity it runs more slowly. He illustrated this with an example of an astronaut visits a black hole which has a ton of gravity. That astronaut’s life gets slowed down so that when he returns to Earth, hundreds of years have passed. I thought this was so interesting and feels like sci-fi but is rooted in science. It’s easy to let the imagination run wild and I let that happen and thought, what if the Earth were to be swallowed by a black hole? Definitely, some billionaire would be most concerned with escaping on their own without considering the global community. But, if that were to happen and he were to escape this force of gravity, that would mean time on Earth would exponentially slow and that time for the billionaire escaping would be experienced as long and lonesome. So, I wanted to create a story off of that visual: a beautiful moment that could be suspended in time. That moment is a surfer swimming with whales as a colossal wave has engulfed a city. It’s an off-kilter, wacky, dark comedy. 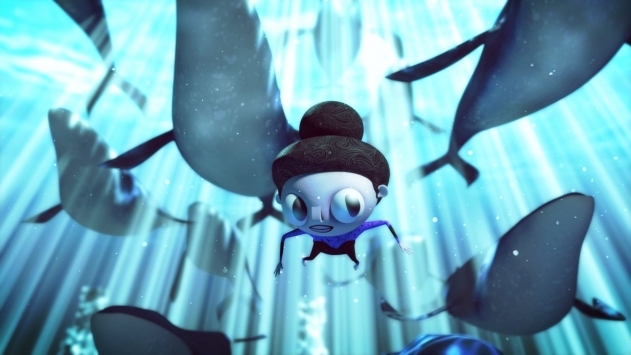 Still from A HOLE, courtesy of the filmmaker.

S&F: How closely did you work with Clifford Johnson on this?

M: Clifford is kind of a superstar. I approached my friend Siavash Yasini who was amazing in the early stages [of this film] making sure my idea was rooted in science and suggesting other resources that prepared me to approach Clifford Johnson. I couldn’t have done it without him. Siavash is an amazing science communicator and he helped me package the film in a way that made Clifford actually interested in being my advisor.

M: It was largely experimental. Pre-production was the longest part, about a year. Production was six months. Because of the [Sloan] grant I was able to hire some help, because a year and a half for a nine-and-a-half-minute independent animation is kind of insane. It really wouldn’t have happened without the Sloan grant because it enabled that help.

The reason production was six months was because we used motion capture. We got to have live actors on set and experiment with ways of moving the body to mimic someone floating through space, through water, on a surfboard. They improvised all sorts of silly moves for the characters. There is Rob Billford and then all these characters who look just like him who I call the “Businessmen of Earth.” Everyone looks the same except for the surfer. The reason for the identical characters was another production limitation. We had limited time and character design takes a lot of time, so the idea of having them be identical was a way to circumvent that. 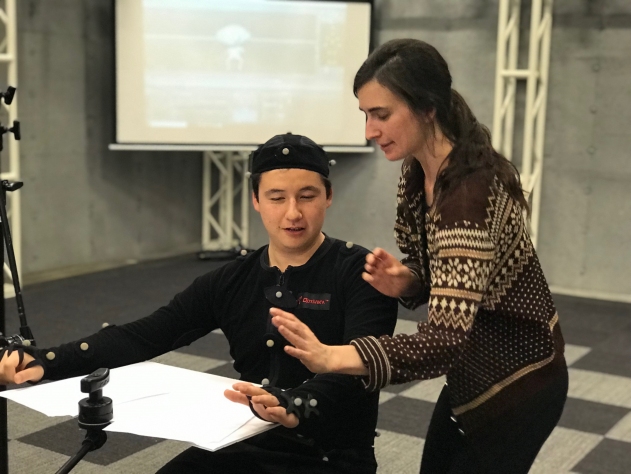 Molly Murphy on set, courtesy of the filmmaker.

I have really good friends who have done deep dives into software like Houdini so I hired them to use what they were learning to simulate the force of a black hole. We went back and forth with Clifford, a black hole expert, to ask if things were looking right. Of course, the aesthetic is a cartoon, but the was to simulate some of the physics of what happens around a black hole. What was crazy was during production, spring of 2019, the very first image of a black hole came out! We had a speculative image we’d created with Houdini then the image came out, so we redid the black hole based on that. At first, I was going towards a stylized palette of pinks and blues, but once we saw [the image] we said, this has to be red, orange, and yellow.

A HOLE is written, directed, and edited by Molly Murphy, produced by Murphy and Ann Lee, with music by Raphael Dargent. The cast includes Mark Rosen, Ana Carolina Estarita Guerrero, Hugh Ross, and Liz Buzbee. The film will be available henceforth as part of our streaming catalogue of Sloan-supported film.