Writer and director Anthony Onah’s (THE PRICE) new feature film GOLIATH is based on the true story of the African American biologist Tyrone Hayes who exposed the harmful effects of an herbicide named atrazine, and then became the target of its manufacturer—the global company Syngenta. Onah is in development with the screenplay, which just received the Sloan Lab Fellowship from the Sundance Institute which includes a $15,000 cash award. Onah went to the Sundance Labs in January 2019 to further develop the screenplay, and we spoke with him at the Sundance Film Festival to hear about the film.

Science & Film: What is GOLIATH about?

Anthony Onah: It is an adaptation of a New Yorker article titled “A Valuable Reputation” by a fantastic writer named Rachel Aviv. The main character is named Tyrone Hayes who is this brilliant African American scientist. After he discovers that a leading pesticide—atrazine—may be harmful to the environment and human beings, paranoia and rage consume him as he battles atrazine’s manufacturer, one of the most powerful chemical companies in the world called Syngenta. I got the rights to the New Yorker piece last August. I put together a script fairly quickly, submitted to the Sundance Labs late, then got a call in December inviting me to the Lab and telling me I had been selected as a Sloan Fellow!

S&F: Did you know about the Sloan Fellowship beforehand?

AO: Yeah, I was aware of the Sloan program. My background is in science. As an undergrad I studied biochemistry and neuroscience, and worked as a neuroscientist for a year after I graduated before transitioning to film. I went to graduate film school at UCLA and at that point the Sloan program had been going for a while at various film schools. They tried to encourage me to do something for Sloan and at that point I was like, no! [laughs] I’m trying to figure out this new form, how to tell stories visually, and I don’t want to do anything science-related.

I outlined GOLIATH as a David and Goliath-type story: the lone scientist against this giant corporation. But really, at the heart of it, what I gravitated to is a story about an African American man trying to live his life fully and exercise his full humanity in a world that doesn’t recognize that.

I just got out of the [Sundance] Lab which was intense and crazy. I worked with various advisors who were just phenomenal. I really gelled with Nicole Perlman, she was one of my advisors, and we hope to continue that relationship going forward. I got a lot of great insights.

S&F: Do you have a science advisor at this point?

AO: Because of my background in science I’ve been able to go back and read the primary literature. I didn’t work with frogs, I worked with fruit flies and zebra fish, but there is enough background to get a sense of the basic animal husbandry, how the frog works as an experimental organism, and the basic conceptual ideas. I still will bring on a science advisor to make sure all of that is completely on point.

One of the things I discussed with my various advisors was that there is too much science at this point. I very faithfully took Tyrone Hayes’ papers and put them in the story, so it’s going to be [about] reducing it to the essentials. What collectively came to be the case is [the story] is really about this man and his journey.

S&F: When we started speaking, you said that Tyrone is somebody who is consumed with “paranoia and rage,” right? But from what I’ve read of the story it seems that his paranoia was justified, that Syngenta was really tracking his every move. Are you questioning that?

AO: No, no. I’m relying on Rachel’s reporting and the various other things that have been reported. There was a real campaign to discredit him because his findings hurt Syngenta’s bottom line. But borrowing from the noir-ish way that the story unfolds that Rachel sets up so beautifully [in the New Yorker], she describes how Tyrone stayed in four different hotels in Washington during the scientific advisory panel to reassess atrazine in 2003. So it starts that way to establish, hey, maybe there is something off about this guy, maybe he’s crazy.

It asks that question. I’m still working through and processing, but something about the way he is treated because of his race, this type of gaslighting, it’s a way that sometimes people of color or women can be led to question themselves, question their sense of reality, and so this is something that we explore. Ultimately, that makes the ending—when the internal records are released as part of the class action lawsuit against Syngenta for contaminating water supplies—it makes it all the more satisfying because many people around Tyrone started to question whether or not he was totally compos mentis.

S&F: Are you going to talk to Tyrone?

AO: That’s the plan. I have not yet. But I would love for him to be as closely involved as he wants to be, and Rachel as well.

Stay tuned to Science & Film for more as GOLIATH develops. 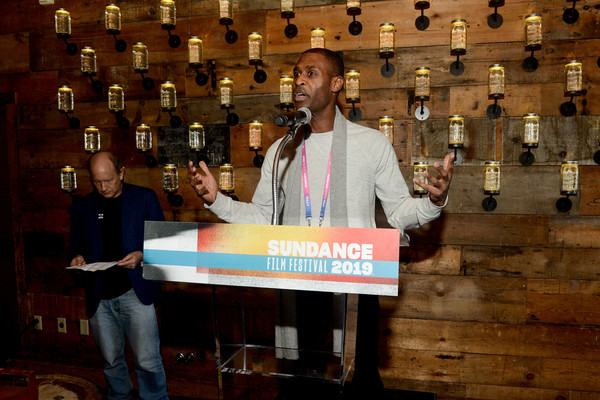 Cover photography by Dan Winters for The New Yorker