The new feature film THE HOUSE OF TOMORROW, directed by Peter Livolsi, is about a teenager incorporating the ideals of the futurist and inventor Buckminster Fuller into his life. Fuller held 28 patents and proposed solutions to problems of overpopulation, cost of living, and dwindling resources. Ellen Burstyn stars as a proponent of Fuller’s teachings. In real life, she and Fuller were friends; they met in the 1970s when she was shooting THE EXORCIST. THE HOUSE OF TOMORROW incorporates never-before-seen footage that Burstyn herself filmed of Fuller.

As Livolsi’s film was being completed in late 2016, Science & Film spoke on the phone with Ellen Burstyn about how she first met Fuller and what she learned from him. Audio from that interview is just released. 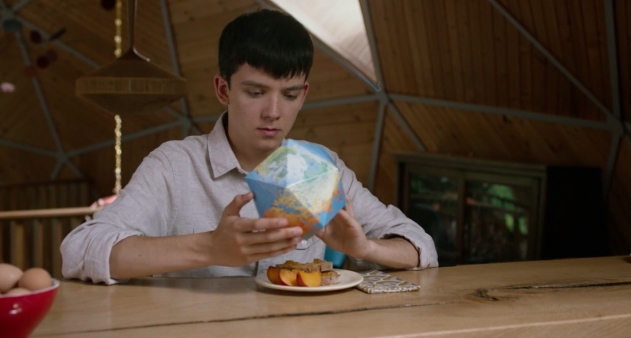 THE HOUSE OF TOMORROW made its world premiere at the 2017 San Francisco International Film Festival. According to a Variety review, the film makes good use of “archival film footage and other materials that attest to the myriad achievements and utopian ideals of Fuller, whose vision of the future now seems both prescient and sad—the latter because society has ignored or bungled so many of the things he was prescient about, to its misfortune.”

THE HOUSE OF TOMORROW script received support from the Alfred P. Sloan Foundation through a partnership with the Tribeca Film Institute. Peter Livolsi adapted the film from a 2011 novel of the same name by Peter Bognanni. Livolsi directed, and Tarik Karam and Danielle Renfrew Behrens produced. In addition to Burstyn, the film stars Asa Butterfield (HUGO), Alex Wolff (A BIRDER’S GUIDE TO EVERYTHING), Nick Offerman (PARKS AND RECREATION), and Maude Apatow (FUNNY PEOPLE).