The Criterion Collection released Stanley Kubrick’s DR. STRANGELOVE, OR: HOW I LEARNED TO STOP WORRYING AND LOVE THE BOMB (1964) on June 28, 2016. The Blu-ray disc includes special features such as an interview Kubrick did with physicist Jeremy Bernstein in 1965. The full interview is available to stream below:

Kubrick purportedly based the character of Dr. Strangelove on theoretical physicist Edward Teller. Teller was the inventor of the hydrogen bomb. He worked under Robert Oppenheimer on the Manhattan Project, and continued to research nuclear weapons after the Second World War. The film turns the US paranoia about nuclear weapons during the Cold War into a black comedy. Peter Sellers plays Dr. Strangelove, the maniacal government advisor with a Nazi background who suggests a future where people live underground procreating only the most fit of the species.

In their interview, Bernstein questioned Kubrick about his interest in nuclear war. “Well, I was interested in whether or not I was going to get blown up by an H-bomb prior to LOLITA,” said Kubrick. “You start off by thinking there are these bombs and you get a World War II mentality. Then, when you read the literature in the field your first reaction superficially is you’re very encouraged because you suddenly realize there is a whole body of thought that’s gone into the whole thing. […] Then, as you read on and on and become more involved then you begin to realize that all of these things lead to very paradoxical outcomes. […] I suppose the most thematically obvious thing about DR. STRANGELOVE was the paradoxical outcome of any particular line of thought.” 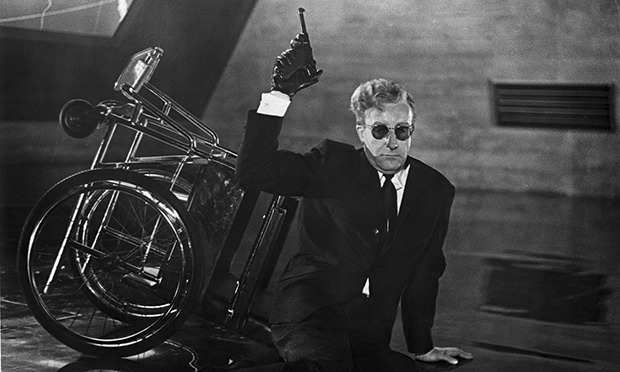 The makeup artist Stuart Freeborn, who worked on many of Kubrick’s films, transformed Sellers into three characters, including Dr. Strangelove, for the film. Museum of the Moving Image last screened DR. STRANGELOVE in November 2015.

Museum of the Moving Image will be screening 2001: A SPACE ODYSSEY on July 29, 30, and 31 as part of See it Big! The 70mm Show organized by chief curator David Schwartz and associate curator Eric Hynes. (Freeborn did the makeup for the man-apes in the “dawn of man” sequence at the start of 2001). Collections curator Barbara Miller wrote for Science & Film about the making of 2001: A SPACE ODYSSEY and the film’s original concept artwork, which is on display in the Museum gallery through August 14.